I App Invented all day today. Half of this was because it was fun, the other half was because it took all day to get anything reasonable done. Before I get into this at all, let me say that I had fun. I think App Inventor could be a cool tool in the future, and it was relatively bug free and nice to use. I think they have done a good job on it and I'm very happy for them. I don't know what their plans are for adding more language features in the future, but even though it was fun, I won't be using it again until they add a few things. I'll explain.
But lastly, before I do, I want to say that I hope I simply haven't overlooked anything. These are my impressions after using it for a day, and they are impressions from my language designers perspective. If I've managed to overlook some capabilities because of failure to read everything I was supposed to read, then I apologize. I don't think this is the case though.

After growing up and becoming a decent functional programmer (and/or growing out of Java), whenever I try to learn a new language that doesn't have certain functions that I've grown accustomed to (like head, tail, list-to-string, string-to-list, filter, map, flatten, and more) I find that I build them immediately and then start actually building something. Guy Steele put this so elegantly in his talk Growing a Language.
So, I set out to build them. But I found out right away that the blocks in App Inventor were severely limited. You do have the ability to create your own functions, but there are no higher order functions so right away you lose the ability to write map and filter (without repeating the mapping and filtering logic every time). Both map and filter could be accomplished with data abstraction (albeit slightly unnaturally), but that doesn't exist either. Ok, I'll be honest, I didn't expect this higher order functions, so this is ok. I didn't really expect data abstraction either. So I'll let that slide too. But, it sure would be nice if we could have a blocks language that does have them.
App Inventor does have Lists though, and Strings. But, Strings are not Lists, and no functions are provided to convert between the two. This bit was quite frustrating. Having to write string-to-list and list-to-string seemed wrong, especially when those are two of the main data types in the system. Lists did seem to implicitly convert to Strings in certain situations, but wrapped in parens. If I simply wanted to convert [a, b, c, d, c] to "abcde", I had to use my function.
So I set out to build both of those functions, and I started with string-to-list. This is when I found out the really bad news, the one fundamental flaw with App Inventor. You can't have local variables in your procedures... Worse yet, every time you need to name something, it becomes a global variable.
The last one is particularly bad, because if you have two operations that work on lists, you have to pick a new name for the argument to each of the functions. For example, imagine if you had to do this in Scala:

And imagine further that these names followed you around wherever you go.
You might be thinking, 'Well, maybe its not too big of a problem. After all, it's probably the case that App Inventor was designed for small things, and for teaching.' Well, the global thing is a real problem. Having to explain this to beginners trying to learn would be a nightmare. Thankfully, the App Inventor team does recognize this. Hal Abelson said on this thread,

"We're planning on adding local variables (no ETA). We agree that these are important for teaching programming."

Phew. But then again, that was August 7th and we're now pushing into December. (But I know how this goes as I've been working on a couple of my own language features for over a year now.)
Now back to the second point; having every procedure stomp all over the global namespace did turn out to be a problem in a relatively small amount of code. Yes I wrote all day, but I did't really churn out that much. Part of this was because I was slowed down mucking through the UI trying to find my procedure call blocks. I ended up with so much stuff in the My Definitions thingy, that it was a nightmare to find anything. This could probably be cleaned up pretty easily if they added the ability to sort it alphabetically. But even so, the globals business is bad for other reasons too. It just sort of continues encouraging imperative programming in a very unsatisfying way. I feel dirty after it. Oh well, hopefully they can get it fixed. Like I said, I did have fun, so I'm not trying to be negative, just blatantly honest.
Ok, finally back to string-to-list. Right away I noticed that there wasn't a charAt function. There is a 'segment' function which is basically substring, but I wanted charAt. So I wrote it, and fortunately it was one of the easier functions to write. Here it is: 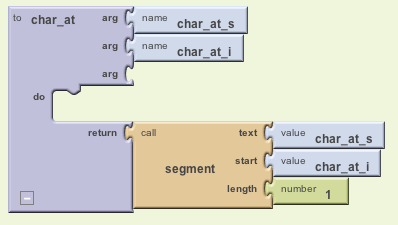 The first time I wrote the string_to_list function, I wrote it using globals in typical imperative style. Here it is: 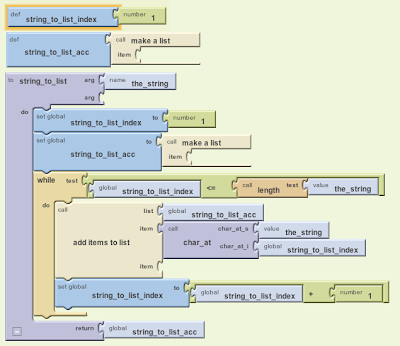 Hopefully that doesn't come out too difficult to read. If it does, you can just click on it to view it bigger. I just looped until the end of the String, adding to an accumulator. The accumulator was a global, along with the loop index. This is pretty gross, but whatever, it works. I tried it without the globals, but this turned out to be even worse, I think. Well, maybe not worse, but bigger, and uglier: 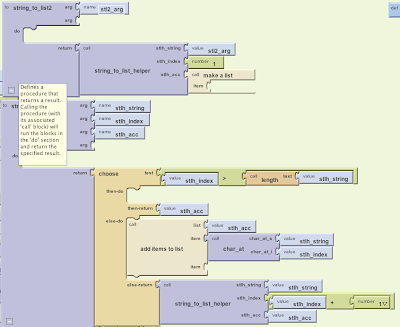 This one might actually be too small to read, and I screwed up the screen shot, but you can click it. I think most of what you need is there. Because I am not using a global, I have to use recursion. But this means I have to have the index and acc parameters passed in. Because I don't want users to have to pass this in, I just used two functions. The actual meat of the function is roughly the same size as the other. Fine. We'll they are both pretty huge, so not fine...but fine.
Ok, 1/2 the day is gone and I have string-to-list and charAt written (maybe an exaggeration, I can't really remember). At this point in writing this post I went to look for list_to_string. I couldn't find it. I swear I wrote it. Didn't I? Did I not need it? This just goes to show the problems with finding things in App Inventor. It's a big pain.
So maybe I didn't write it. But I did write some others I was going to need. I've explained most of the problems that I encountered, so most of the rest of the functions can be displayed without ceremony.
Here are head and tail: 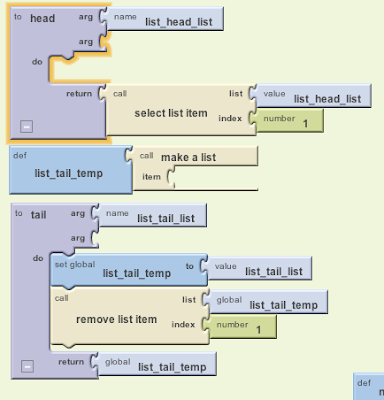 Head was fine. Tail was kind of disgusting because I had to mutate a global so that I didn't have to mutate the argument. Try explaining any of that to a beginner.
Zip suffered from problems already discussed: 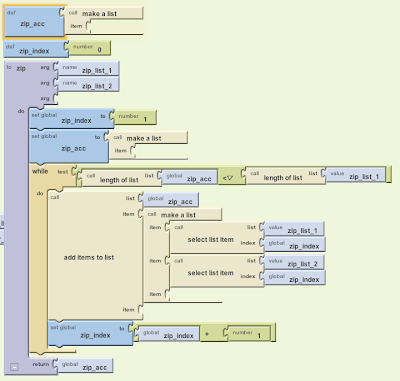 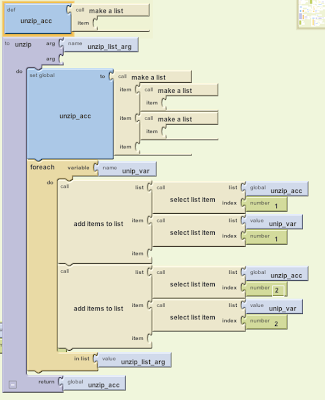 Filter was problematic as I explained earlier. You can't pass lambdas around, so any time you want to filter you just have to reproduce the logic. There's no way around it. Map too (though I didn't write map, but I guess unzip is just a map). Here is a simple filter. I didn't really test it because I used a much more complicated one. But, I think it should work: 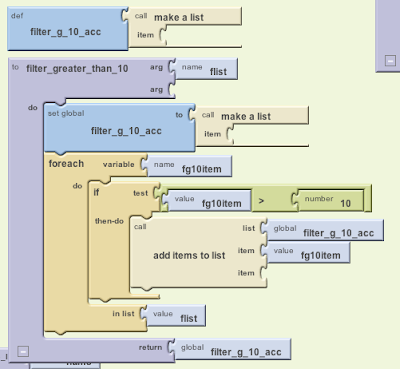 Finally, I wrote flatten. This one proved to be tricky and fun. I haven't actually used it anywhere yet, but thats ok. It was tough to figure out at first, but I got it. See if you can understand it: 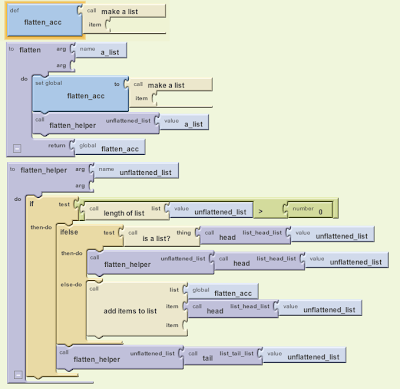 Some other remarks and random comments:
That's just about it. I guess I'll conclude. I had fun, I like App Inventor. By the end of the day, I had a working game going (not described here). I think App Inventor could be made pretty awesome by fixing some of the things I mentioned above. I'm not sure I'll continue to teach it to my son or not. On one side of the coin, it can do some pretty fun things with the phone (some of which I haven't tried, and none of which I've written up here.) On the other side, it's got severe limitations and I might as well move my son to Build Your Own Blocks. I probably actually have more comments, but I'm getting pretty tired at this point. Goodnight Moon.
Posted by Josh Cough at 7:12 PM No comments: